My family have recently started participating in the Icelandic tradition Jolabokaflod which translates as a ‘book flood’ where we gift each other books on Christmas Eve. If you’re as much of a bookworm as I am then I’d highly recommend starting this tradition next Christmas!

This year I received A Tudor Christmas by Alison Weir and Siobhan Clarke. Having been a Tudor nerd since I was a kid I was very excited to begin reading and find out more! 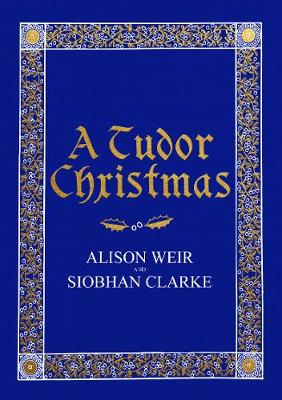 The book is set up in chapters around the 12 days of Christmas (24 December – 6 January) with each chapter focusing on a popular tradition in depth:

The examples Weir and Clarke provide not only focus on the nobility and royal family but also ordinary working people for who Christmas was a welcome break from everyday hardship.

One of the interesting traditions that could be found across all parts of society was wassailing, which was a “wooden assail bowl, decorated with ribbons, contained hot ale, beer or cider, apples, sugar, spices, rosemary and a crust of bread at the bottom. People would pass the bowl, crying ‘Wassail!’ and each recipient would take a drink and pass it on, saying ‘drinknhail!’ the crust of bread at the bottom of the wassail bowl was reserved for the most important person in the room, the origin of the later custom of ‘toasting’ at celebrations”. I also discovered more about one of more familiar traditions – gift giving.  It turns out Christmas presents were exchanged not on Christmas day like today, but on New Year’s day. Unsurprisingly this tradition was found more often in the upper and middle classes for economic reasons, with both Henry VIII and his daughter Elizabeth I encouraging this practice, with courtiers expected to give them gifts. This included the standard expensive gifts like gold plate and jewellery, but some of the most favoured gifts were of a more sentimental nature. Hans Holbein, the famous Tudor painter, in 1540 gifted Henry a portrait of his then two year old heir (the future Edward VI), in thanks Henry gifted Holbein with a silver cup. In a society where hierarchy was everything, these gifts could have political significance. If a gift was rejected by a monarch, this showed the gifter was not in the royal good books. For example the Duke of Norfolk sent Elizabeth a jewel as a gift whilst imprisoned, but this did nothing to allay her wrath for his actions (which involved scheming to marry Mary Queen of Scots).

I won’t give away too many more details, as I’d highly recommend reading it for yourselves! It can be found at Waterstones here.

Weir and Clarke have successfully brought a Tudor Christmas to life, providing a fascinating read on the history of one of our favourite British traditions.

One thought on “Recommendation: ‘A Tudor Christmas’ by Alison Weir and Siobhan Clarke”