On our way to Anglesey, we decided to take a break in Conwy and see the famous castle. We hadn’t checked in advance whether it was open, and alas it wasn’t, so learn from us folks and check websites in advance! We had a second go at visiting later in the week and it was well worth the wait.

Conwy Castle is one of the many castle complexes built by King Edward I of England (1239-1307). Known as a warrior king, Edward I engaged in numerous conflicts with the Welsh princes culminating in the 1284 Statute of Rhuddlan. This important document resulted in much of Wales coming under English administration, becoming known as the Principality of Wales until 1536 where it was superseded by further legislation tying Wales into England governance. During this period Edward began an extensive castle building program, much of which we can still today for instance Conwy, Beaumaris, Caernarfon and Harlech which are all World Heritage Sites.

Conwy Castle dominates the town, which shares the same name, and as you walk up the castle rampart its awe-inspiring in its scale. At the inception of the building project in 1283, which includes the town walls, Edward planned for the castle to “be the administrative centre of a new county”. It was completed in just four short years at the cost of £15,000. To put this in perspective, in today’s money that would be around 45 million pounds. Edward did not use Conwy as his administrative centre in the end, and is only known to have stayed once at the castle during the Christmas of 1294 whilst facing rebellion from Madog ap Llywelyn.

The castle is now a ruin and as we walked around the site there was signs showing us what each area would have been e.g., Chapel Tower. It’s always difficult to provide interpretation at ruins but the staff have done a great job including interpretation panels on the walls in key locations so visitors can find out more about castle whilst walking in history. My favourite part of our visit was going up a stairwell to the walkway, where you could get up close to the imposing towers and see the wonderful views across the River Conwy.

We really enjoyed our visit and I’d highly recommend seeing it for yourself if you get the opportunity!

Have you visited Conwy Castle? I’d love to hear your thoughts in the comments section below.

ODNB Edward I by Michael Prestwich 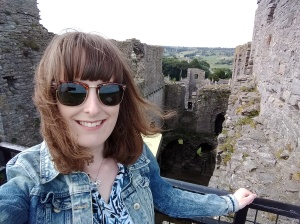